About us
Get to know us and everything we stand for
Our Courses
So many choices we got you covered
University Applications
Prepare like a PRO Say goodbye to worries
Examination Centre
Get Certified kickstart your career early
GCIS
Serious learner? View our post-graduate programmes
SkyWalkers Club
Join our family learning like you've never experienced it before
Gallery
Unique Moments a small taste of the XTMPI experience
Press
Stay in the Loop announcements, press releases and related articles

Exhibition – Mothers & Children of the World 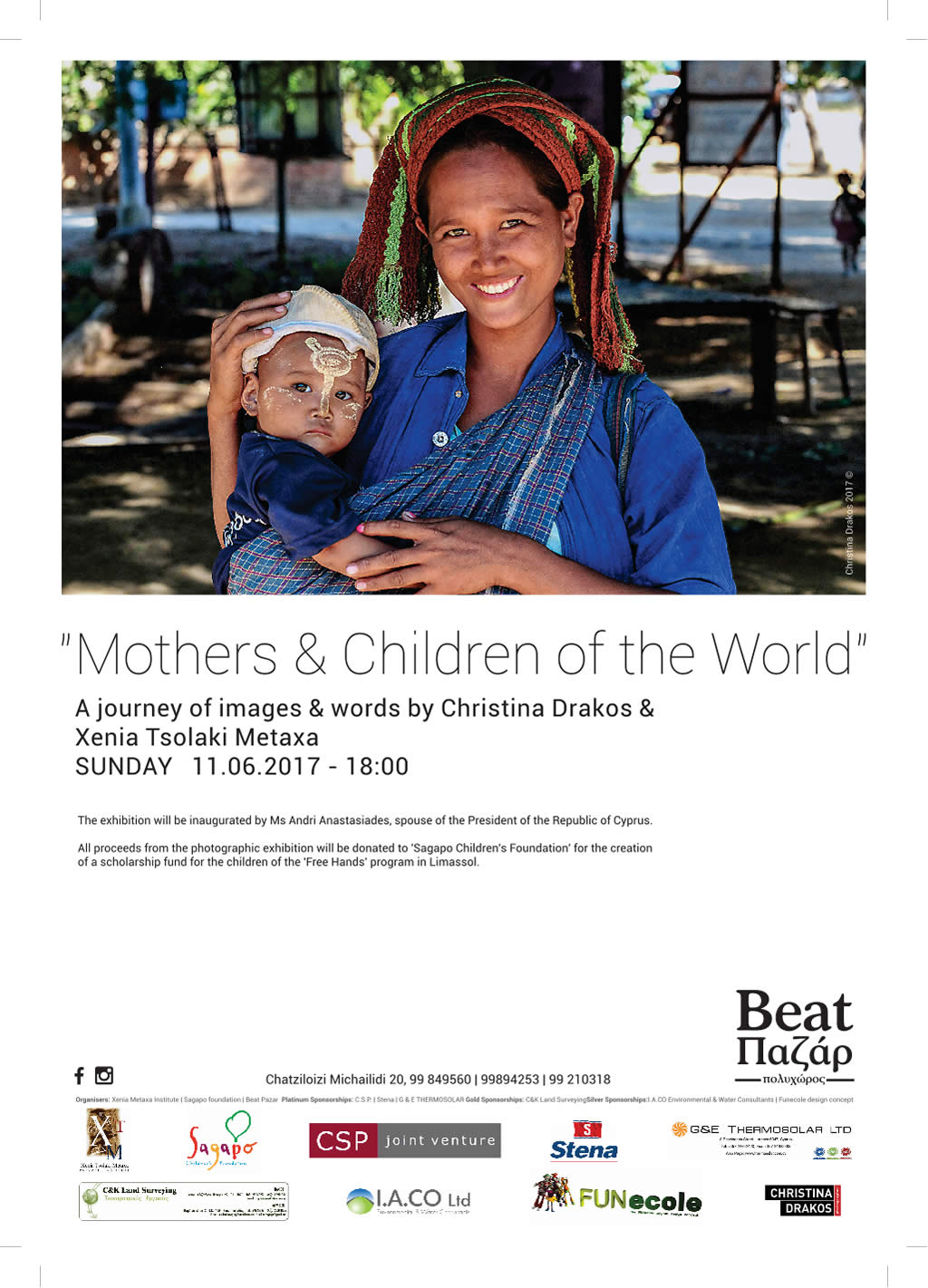 A journey of images and words by Christina Drakos and Xenia Tsolaki Metaxa.

The exhibition will be inaugurated by Ms. Andri Anastasiades, spouse of the President of the Republic of Cyprus.

Two mothers, an artist and an educator, capture the light of the soul through a photographic camera and a pen.
Christina Drakos, a renowned photographer and Xenia Tsolaki Metaxa, an awarded educator, researcher and writer, explore the universal relationship between a mother and her child.

Photographer Christina Drakos chooses to only collect Light with her camera: “This exhibition is devoted to maternal love and universal tenderness, and explores the light that emanates from the depth of the human soul.” This was Christina’s major motivation: to capture the sincere joy that emanates from certain people, whatever the vagaries in their life. Each image tells a story: “Even though some people live in very difficult, often precarious conditions, they never lose their genuine smile and good energy.” she concludes. It is only when she looked through her past projects that she realised that a pattern of a universal idea was formed: that of motherhood and the relationship between a mother and her child. When the twelve-year-old Christina found herself with a camera in her hands, she begun searching for the Light. Since then, this eternal humanist continues to capture light through her camera and her travels in more than sixty countries around the world.

From 2001 until today Christina has presented twenty solo exhibitions with her works featured in Limassol, Nicosia, Brussels, Istanbul, Athens, Paris, Isle-sur-la-Sorge (Avignon) and Bologna. All proceeds from the sales of her photographs are given to several charity organisations.

This is the mission of SAGAPO Children’s Foundation: to support children with reduced financial resources and help them grow physically, intellectually and emotionally. In January 2013, following her heart and inspiration, Christina founded SAGAPO Children’s Foundation (www.sagapo.org), which actively works towards fulfilling its mission – to help provide children worldwide with the necessary learning environment in order for them to thrive in their communities.

Xenia Tsolaki Metaxa complements the light of Drakos’ lens with essays and poems that capture moments from her personal journey of motherhood and her encounters with children during the last 30 years of her life. As a mother, an educator, a writer and the founder of XTMPI Private Institute www.xtmpi.ac.cy and SkyWalkers Charity Club, she feels that mothers are blessed to be holding the future of this world in their hands.

“Mothers around the world must be aware of the light that motherhood places upon them; the light that Christina so artfully manages to capture with her camera. It is our duty to urge mothers to become aware of this instinctive almost growth—the initial absolute attachment, the dependency, the laughs the conflicts and the innate love that always lands.

“The decision to combine the world of photography and the world of writing was spontaneous,” Xenia says. “It just felt that it was time to integrate our arts. The beauty of the written word, intertwined with the immediacy of photography could come together to aesthetically please, but above all to sensitise an audience towards the contribution to a grand humanitarian cause”.

Following her studies in the U.S., Xenia Tsolaki Metaxa, holder of the Ward Medal in Literature by CCNY New York and a PhD in Education, came back to her homeland determined to make a difference in the educational arena. Acting upon her vision, she founded a school which children of all social backgrounds could attend with joy, feeling that this was their second home. Love for education and the joy of learning made children, parents and teachers enter Xenia’s magic circle of learning, a research project which led to the motto of her school ‘where learning becomes an art’.

This journey of images and words is put together by two artists and mothers, for the children of the ‘Free Hands’ program in the city of Limassol; a program supported by SAGAPO Children’s Foundation. Therefore, all proceeds from this project will be contributed to the creation of a scholarship fund for the children.

“A mother is like the sea, I need only to tell you this; and when she sees the rain, the storm, the beasts and «gifts» of life, one thing and only one she thinks of: the sun that blossoms through the clouds, swift, to brighten up her life. This, my child, is enough to keep her strong and brave, when tough times come, this will keep her safe.”
A mother is like the sea, Xenia Tsolaki Metaxa, 2017

Special thanks to all the sponsors who support this vision.

More about the institute

URGENT ANNOUNCEMENT FOR LESSONS BETWEEN 24-29 JANUARY 2022

VERY IMPORTANT UPGRADES IN OUR SERVICES

There are no words to express my feelings!!! Only tears of joy!!!Thank you Pearson, thank…

URGENT ANNOUNCEMENT FOR LESSONS BETWEEN 17-21 JANUARY 2022